The Army-Navy football game is one of the most enduring rivalries in all of American sports. The game has been nationally televised by CBS Sports for the past 30 years, attended by Presidents and Generals and Joint Chiefs of Staff, and has been played at such famous venues as the New York Polo Grounds, Pasadena's Rose Bowl and Chicago's Soldier Field... 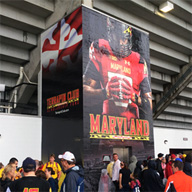 After 65 years in the Atlantic Coast Conference as one of its charter members, the University of Maryland made the bold decision to switch conferences and join the Big 10 Conference. This historic realignment warranted a significant face lift to the Terps' 54,000 seat Byrd Stadium, turning it into a first-class venue that would rival the other Big 10 schools... 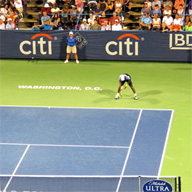 For the past 20 years Arena Graphics has designed, produced and installed the signs, banners and display graphics for the Citi Open Tennis Classic - Washington, DC's only professional tennis event. This project involves thousands upon thousands of details, ranging from the layout and design of hundreds of signs and banners to the on-site installation of nearly 200 sponsor logos... 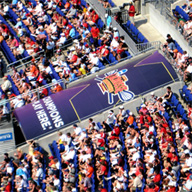 The Men's Lacrosse Championships are the NCAA's second largest event behind college basketball's March Madness, drawing up to 100,000 fans each year during Memorial Day weekend. After working closely with Arena Graphics on the Ice Hockey Championships (aka "Frozen Four") the year before, the NCAA's Brand Strategies and Events staff never questioned what company would handle the huge array of graphics for this nationally televised event... 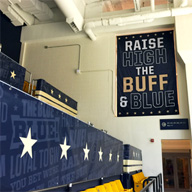 On the heels of the teams' first March Madness appearance since 2007, GWU's rejuvenated men's basketball program was looking to update the look of the Charles E. Smith Center, their on-campus arena in the heart of Washington, DC. Employing a working relationship that dates back to 1992, Arena Graphics teamed with GW's graphic designers and facilities staff and came up with a stunning transformation to the venue's main basketball arena...